An anonymous someone once commented that “a physicist is the atom’s way of thinking about atoms”.*

Well then, an artisan could be said to be Creation’s way of thinking about creativity. 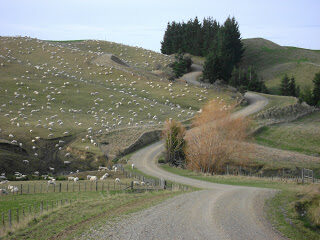 My mother’s family farmed sheep. The station was remote in her day – a hundred dusty, gravelly miles to anything approaching civilisation. It was a high country sheep run in the South Island’s Central Otago province, and was – by New Zealand standards, huge. Over 100,000 acres. It was where I spent my childhood summers, and where I gleaned a little knowledge of sheep farming from my uncles and cousins – tending, lambing, shearing. Given that background I guess it was inevitable that my first experiments with ‘making things’ would involve wool. 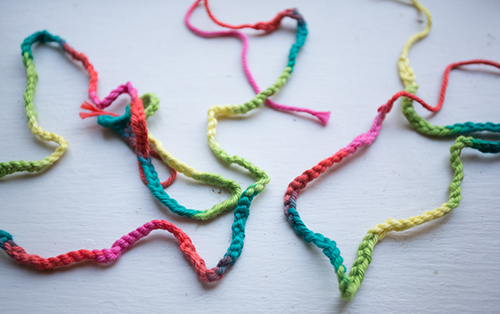 Fingerknitting came first. Imagine the magic of watching a woollen chain manifest from one’s own tiny hands – and the surge of ideas about what it, in turn, could be turned into! Next I remember learning a simple way of knitting a long tube using an old wooden thread spool. It had little nails hammered around the central hole, and by winding the wool around the nails then popping the previous row of ‘stitches’ over the new round, a long tail would eventually make its way out the other end of the spool.

It wasn’t long before I learned the knack of needle management and began knitting garments. The first ones were for my doll. That’s when I learned about shaping and sizing – she was my in-house model. Soon sweaters were on the production-line. For my teenage sweethearts at first. And myself of course. I adored being able to make a garment that was exclusively my own, one that would be seen on no one else in New Zealand – or on Planet Earth. No one! It was, in retrospect, the beginning of my enterprise as a maker of wearable art.

I loved knitting. You have to love it to end up with a whole garment, because it takes a l-o-n-g time. Every stitch is a little action in its own right, and there are uncountable numbers of stitches in a sweater. Why did I find it so appealing? At the time, in my early teens, I would have said: It shuts me up and makes me feel good.

Now I’d have more to say, like: It calms me. It slows down my manic mind. It brings me to a stillness where my hands know exactly what to do without any help, where I seem to disappear altogether into a quiet spaciousness where wool and wooden sticks and fingers are dancing together as one. It makes me marvel to see the fabric coming into form – it’s addictive, especially if a pattern is being used: just another row, just to see how it’ll look…

The hands that mastered circular needles, traditional Fair Isle patterns and gorgeous multi-hued designs produced with my own hand-dyed yarns (see example above) went on to explore other fibercrafts. Silk painting, dye craft, off-loom weaving, paper crafts – there are a few examples here. Then they went on to incorporate these in mixed media works, together with painting.

In retrospect I notice that I’ve always been attracted to acts of making that require a rather extreme degree of patience, and in return offer an almost reverential relationship with the materials at hand. (Let’s face it, you’d have to be seriously addicted to slow art to make a practice of painting the exhalation of your breath.) Renate Hiller calls it “the practice of empathy.” Her hands might be a decade older than mine, but her take on the profound importance of human handwork is identical to my own.

I’m looking at my hand right now as we talk. It’s got a lot of wrinkles ’cause I’m 81 years old. But it’s linked to hands like this back through the ages. This hand was shaped by when it was a fin in the mother seas, where life was born. This hand is directly linked to hands that learned to reach and grasp and climb and push up on dry land and weave reeds into baskets. It has a fantastic history. Every particle and every atom in this hand goes back to the first — what Thomas Berry calls ‘the primal flaring forth,’ the beginning of space-time. We’re part of that story.

The use of the hands is vital for the human being, for having flexibility, dexterity. In a way the entire human being is in the in the hands. Our destiny is written in the hand. And what do we do in our modern world with our hands? You know, we move the mouse, we drive and so on. We feel plastic most of the time. The hands are relegated to very little that’s actually bringing dexterity to our times. So we have come ever more estranged from nature and also from what other human beings are doing – the whole social element comes into play as well, because if I make something then I think ‘Hmmm, how was that yarn made?’

So there is this loss of understanding the value of things, of the meaning of things, and in handwork, in transforming nature we also make something truly unique that we have made with our hands, stitch by stitch, that maybe we have chosen the yarn, we have even spun the yarn — even better – and that we have designed. And when I do that, I feel whole. I feel I am experiencing my inner core, because it’s a meditative process.

You have to find your way; you have to listen with your whole being. And that is the schooling that we all need today. Because we’re so egocentric and this makes us think of what is needed by something else. So we are in a way practicing empathy — empathy with the material, empathy with the design.

I think that this practice of empathy that we do in the fibercrafts is paramount for bringing healing to our world, and it’s a service for the Divine – that we are surrounded by.

Renate Hiller is the co-director of the Fiber Craft Studio at the Threefold Educational Center in Chestnut Ridge, NY.

* Quoted in A Short History of Nearly Everything, by Bill Bryson