I love the way a deeply insightful illustrator, such as the astonishing Hallie Bateman, can employ such economy of line and shape to communicate profound wisdom. In this context a picture is certainly worth a thousand words.

What is the relationship between fear and creativity? Would you say they are mutually exclusive? Where does that leave the one who thinks they are afraid, or who imagines they are creative?

when the artist disappears, creativity radiates

The noun of self becomes a verb.
This flashpoint of creation in the present moment is where work and play merge.

When I begin painting I am in a state of unconsciousness;
I suddenly forget that I am holding a brush in my hand. 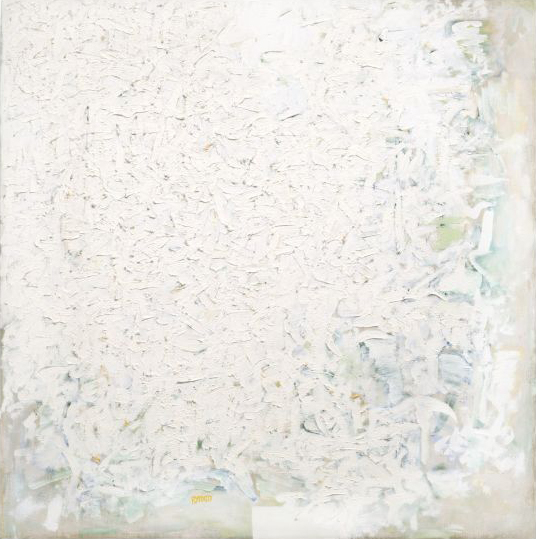 Let’s talk about some piece of music or work of art that comes out of connectedness with Stillness, or Presence. To some extent, the work of art or the piece of music still carries that energy field. It can put [one] in touch with the deeper dimension within. But there’s a little bit of an opening required. If there’s only the density of the ego, then the transformational possibilities of art or music are not realized.

A little opening is required in the viewer, or the listener, and then it can be quite a wonderful thing to listen to music or to contemplate a work of art. You can be transported, if only for a moment, into that alert stillness out of which it originally came. That’s a beautiful thing.

Another aspect is ‘losing oneself’ — going too deep, almost losing oneself in the ground out of which creativity comes. In the creative process, there’s always a balance that’s needed, so that you don’t lose yourself in Being. It could happen to an artist, it can happen to some people who awaken spiritually — they suddenly plunge so deeply into Being that they lose all interest in doing. […]

As long as you go within, and give form to that which is resting in the formless, be used by it — so that through you it can come into this world of form. Don’t stay down there and lose yourself in it — that’s not necessary. […]

Being objective about my work is somewhat tricky because when creating is happening I seem to ‘disappear’. This has always been a mystery for me. Looking back, I notice several stages of fascination or inquiry as I explored this mystery.

In the beginning, as a child, there was simply the delight and joy of making things. Pure play. Innocent wonder. Then, during the years of my education, the criteria invented by those who knew what ‘art’ was ‘all about’ crowded in and I attempted to make my ‘things’ fit those criteria. I began to explore the intellectual arena called aesthetics. And the mystery faded, quietly, almost without notice.

For over twenty years I made my living creating wearable art. The magic of creativity was there, but it was increasingly elusive and erratic. Since its presence brought a profound and inexpressible sense of wonder and rightness, a sense of utter blessing which never occurred elsewhere in my experience, I began to stalk it. As I did so, it led me away from concerns with financial success, with exhibiting, and even with peer acceptance. It took me into the selva oscura, into exile.

The creative encounter had become my teacher, my guru. It took me to places all over the world where I would be involved in creative education, where I would meet others whose over-riding passion was the mystery of creation. It kept me on the road for decades practicing, teaching, inquiring. It ensured I’d never become locked into making a certain type of art product; if I fell into habit or repetition it simply disappeared. It was replaced by tedium.

Eventually the via creativa led me back to square one. I had spent decades forgetting that I knew everything I needed to know about creating (just play!) and gathering up an arsenal of concepts and conclusions about creativity. Now I had to forget everything I had learned.

It wasn’t so difficult. Play is the key to beginner’s mind, and humans are hard-wired for play. (Although the wires can become rusty and tangled sometimes!) Beginner’s mind is mind that is free to wonder. No conclusions, no prescriptions, not even any intentions. Just space, in which creativity may – or may not – come to play.

The inexpressible
is the only thing
worth expressing.

I have nothing to say
and I am saying it.

Painting is a long road.
The beauty, to me,
is in the not knowing where one is going.

Nothing is a mistake.
There’s no win and no fail.
There is only make.

A series of free e-books for creatives
of all ages and levels of experience.

We don’t understand to create;
we create in order to understand.

This site was created as a Temenos of sorts – a sanctuary where the oft-overlooked relationship between creative expression and the unknown/unknowable can be openly explored and celebrated.

Creativity is radical discontinuity
in a pattern of thought.