The highest purpose is to have no purpose at all.
– John Cage

My mind has returned, these past months, to the delights of playing without purpose in (and out of) the studio – especially embracing aspects of chance in my work.  Early in my career as an artisan I played with processes that were very fickle – applying wax, winding, clamping, dipping fiber in dyes, bleaching, discharging and manipulating textile surfaces. These processes were instrumental in showing me the hidden gift in the “goof-up”. Eventually, as I relaxed with the unexpected ways that the process would defy my expectations and spur my curiosity, I came to regard the unexpected as pure magic. Those “failures” would always open a door onto what might be possible if I surrendered my expectations and pushed the process a little further…

In India I folded Khadi paper and buried it in mud for days.  When I unearthed the folded wads of paper I was enchanted to find that there were lines and tones etched into the surface by the action of the earth and water – and sometimes a worm had left evidence of its journey or a hearty meal.  In the work above, this was just the beginning of my journey – there would be rubbing, collage and stitching added before the work reached its resolution.

It’s the unexpected and uninvited occurrences in the studio that excite me the most. I’m not at all temperamentally suited to production-by-design. What’s more, I’m far enough along the via creativa now to have learned that genuine creativity has little to do with the known. Or with innovation of old ideas. Or with work repeated ad infinitum because it was acclaimed and commercially successful in the past. I’ve come to be convinced that creativity and play are a “goes-with”, as Alan Watts would say. Play is the heart of the matter, and it’s time we made fun of it, as children do. I love Laurence G Boldt’s description of playfulness as a “kind of rascal”:

Playfulness is the dew-fresh, childlike spirit of wonder.
A roving, wandering, wondering, “what if” kind of a rascal.
Unconventional, lightning flash, sailing through the cracks…

If play doesn’t come easy for us we can easily sidestep the “get-serious” inner critic by resorting to chance. We can surrender every decision to the roll of a dice, the selection of a random card, or the way the sticks fall using the I Ching. We can invent our own aleatory devices, and be genuine in our commitment to obey them – just for now, just while we’re playing. (There’s no need for anxiety, the critic will still be there when we stop our game!)

It seems to me that the creative life is actually one big game of chance – whether one’s an artist in the studio or a gardener in the backyard, or a family-absorbed young mother. Chance rolls a situation under our feet; we meet it with open curiosity. We make a gesture, which chance plays with before serving us another … chance.  There have been a few renegade artists who have made the use of chance a formal aspect of their work – in music composition and performance, in writing, and in visual art; I am particularly inspired by the work of John Cage. Influenced by his studies of Buddhism, Indian philosophy, and the I-Ching in the 1940s and 1950s, Cage incorporated “chance-controlled” elements into his ground-breaking work in all media, including watercolors, prints, drawings, and scores.

The function of art is not to communicate one’s personal ideas or feelings,
but rather to imitate nature in her manner of operation.
– John Cage

For Cage, nature’s “manner of operation” was purposeless play. Although he embraced randomness with the use of chance operations, he insisted that this “helped him make choices”, as the crucial ingredient in the process was finding the “right questions” in the first place. In the context of painting, for example, “What colour palette?” “What tools?” “What options for layout?” The painting below is the result of random composition dictated entirely by chance; the outcome is serenely contemplative. 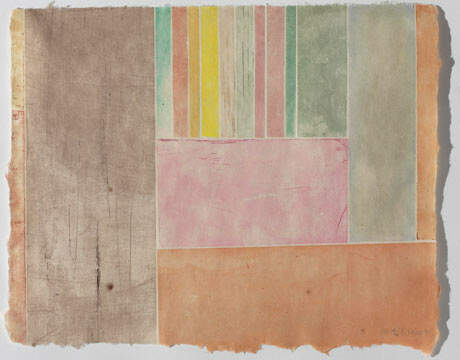 Maybe I am such a play-enthusiast because there was little allowance for it in my childhood years, when creativity was constrained by the need for productivity and usefulness – in other words, purposefulness. But there’s another reason: it was the best strategy I ever came upon as a teacher of art and design. Whether my students were working towards formal exams, or taking art subjects for the love of it, they all responded to the encouragement to play – and indeed, one of the enduring effects of playing with chance (they reported) was that they learned to find the right questions. And that’s a great life-skill, wouldn’t you agree?

It is play, not properness
that is the central artery, the core,
the brain stem of creative life.

The impulse to play is an instinct.