Yesterday I moved home and studio. Body and mind need R&R. What could be better than a cup of tea and some wry wise reminders from painter Agnes Martin about what matters? I love what she shares about staying in bed until she knows exactly what she wants to paint. Ahhh. 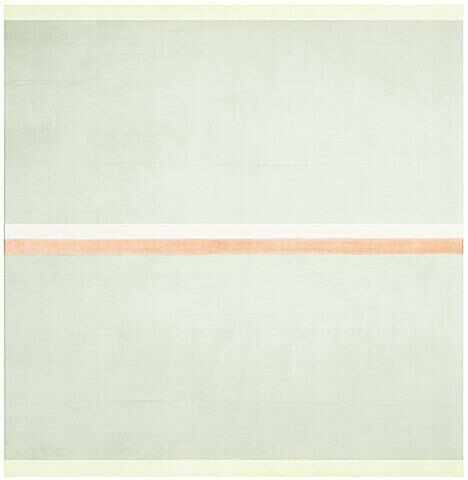 I don’t have any ideas of my own
and I don’t believe anybody else’s,
so that leaves me a clear mind …
– Agnes Martin

Sometimes finding the truth of one’s work – and one’s life – costs everything. How much of our belief structure, our convictions and habitual behavior are we prepared to relinquish in order to allow space for the utterly authentic to express through our voices and hands?

In 1979, at age 29, Jerry Wennstrom destroyed all the art he had created, gave everything he owned away, and set out to discover the rock-bottom truth of his life. He sensed an inner and outer world in perfect order and became a willing participant in that order – he leaped into the void, the ultimate creative act. He began a life of unconditional trust, allowing life to provide all that was needed. He lived this way for 15 years.

Wennstrom’s wish was to open to the energy of life itself. In releasing the structure of daily habits and routines, he learned to trust and appreciate the significance of each moment. This entailed relying on intuition, listening keenly to the deeper nature of feelings, and wisely observing the ways in which our inner world reflects the outer, and vice versa.

In 1998 he moved to Washington State, where he eventually married Marilyn Strong and produced a large new body of art.  Marilyn and Jerry’s charming Whidbey Island home is now filled with his unique interactive sculptures and paintings.  Jerry also built a 40-foot meditation tower on his property, which is featured, along with his story, in a book by Laura Chester called Holy Personal.

During a trip to Italy I was moved by a few ancient, worm-eaten Confessionals I saw in several of the older cathedrals in Assisi. The oldest ones were small and simple and appeared not to be in use any longer. They were often placed off to the sides of the smaller chapels or in out of the way places. These old confessionals were so well-used over the years that the places where knees touched wood were worn in shape of two half moons. There were places on the hand rest where finger nails dug deep into the wood. The inspiration for this art piece was the power and energy of guilt, angst and forgiveness that these confessionals embodied.

I call the piece Confessional and it is made out of an 8′ X 26″ hollow, cedar log that I drug up from the ravine below our house. The outer, female figure is a double door that opens down the middle and around the face to reveal the life-size, fully carved saint inside. Turning the Danger High Voltage switch that is situated under the lower mask turns the saint into a devil — his halo disappears, little red horns appear out of the figure’s head, a forked tongue comes out of his mouth, a tail wags from behind and his hands offer an apple.

Confessional interior showing ‘saint’.
See more details of this work on the blog (see link below)

Jerry’s story is told in his book, The Inspired Heart: An Artist’s Journey of Transformation (foreword by Thomas Moore) published by Sentient Publications and in the Parabola Magazine documentary film called In the Hands of Alchemy: The Art and Life of Jerry Wennstrom.  There is also a Sentient Publications DVD with the same name, which includes a short new film called Studio Dialogue.  Studio Dialogue is a presentation Jerry did before a live audience with music by Susan McKeown, sung by Marilyn Strong.  Jerry travels internationally lecturing, teaching and presenting his film and work and he writes a monthly piece on the spirit of the times for a New York City consulting firm.

Most of the above information is sourced from  Jerry’s website. The images and his comments about Confessional are sourced from his blog.

Click on the screenshot to visit Jerry and Marilyn’s blog.

Jerry Wennstrom is also featured on my website ‘the awakened eye’: the way of trust and transformation

the mountain with its singular bright shade

like the blue shine on the freshly frozen snow,

odor of basswood upon a mountain slope,

a scene beloved of bees; silence of water…

Imagine my surprise to discover that artist, writer and poet Claire Beynon now lives in my hometown – Dunedin, Aotearoa New Zealand – the very city I could not, as a teenager, wait to escape – lured by the attractions of life and culture in North America and Europe. She moved there from Cape Town – living and working nowadays in a gracious old villa overlooking the Otago harbour. What a wonderful addition she is to the cultural fabric of this nowly buzzing city.

Claire’s blog . . . all finite things reveal infinitude . . . is one of my cherished oases of nourishment. I go there for sublime poetry – her own as well as others’, for insightful new thoughts on old topics and artists’ work, for sneak previews of her own works-in-progress, and for an ever-reliable, refreshing, immersion in wonderment. 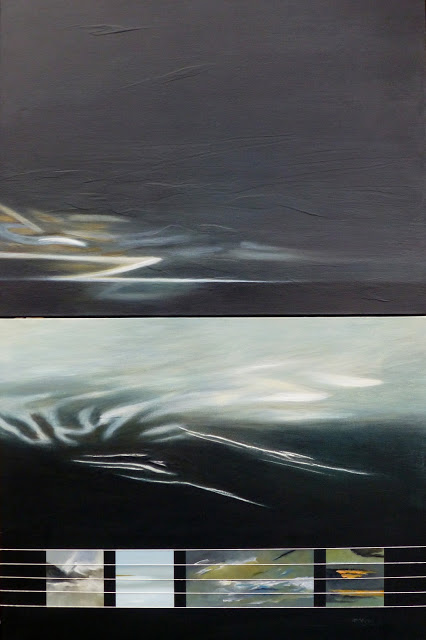 The Stilled Thread of Flight
Oil & steel strings on canvas

Making art is a way for me to connect the physical and spiritual worlds. It is also a means of establishing connections between people and place.

The foundation of it all is not having to know where I am going. I have to trust that there is something out there and in here that will connect. This trust leads my hand to make visible what is invisible. I start out with nothing. The process itself leads me and at some point along the way, I almost always look back and say “ah”.

… when I work, the work takes me to the necessary place of stillness and calm that is essential to my overall wellbeing. Whilst there, trust is like a fountain that energizes me and fills me up. I find I often create visual compositions that counter the outer chaos. Curiously, the more chaos and busyness there is in my outer world, the quieter and more balanced things seem to become in my internal worlds and the steadier and clearer my work becomes. TS Eliot wrote: “At the still point of the turning world is the dance…”  I reflect on these words often.

Excerpts from a conversation with Lawson Bracewell 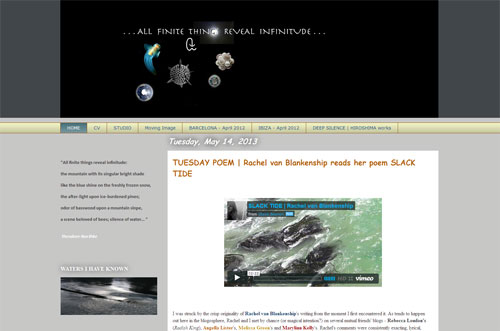 Irish artist John Macormac came into my view via interaction with this blog. I was delighted to meet another artisan who shares some of my idiosyncrasies – there’s a magpie here too, gathering bits of information and stuff, never disposing of anything, and always amazed that she has the ‘perfect’ bit of (whatever) for the unfolding of a making. The way he works in layers – scraping and over-painting, cutting up and creating anew – is right up my alley. Hmmmm. Might have to drop in to Belfast some time soon!

My work deals with an overload of information. I am like a magpie drawn to intricate detail, collecting and manipulating pieces of visual culture. I combine collage, oil paint, acrylics, emulsion, ink, spray paint, conte crayon, chalk, felt tips, pencil and anything else I can find. Found photographs and fragments of text can be included because of a personal sense of meaning, or purely as passages of visual ‘noise.’ 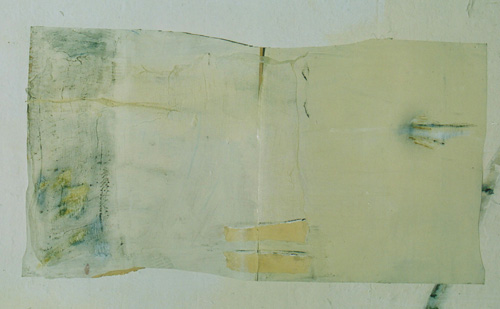 I wanted this work to echo the feel of a beach in winter.
I employed a muted, faded colour palette.
Scrim was glued to the surface and resembles fishing nets.
The piece is an irregular shape, this also recalls pieces of flotsam and jetsam
worn with time and tides.

My work does not start with a finished image in mind. Rather it carries a sense of practical progression; each new area suggests the context and space for the next aspect of the piece. I often work on several at a time. The work is in a constant state of evolution and reinvention. Layers are added and scraped back. Each finished piece displays evidence of this process of revision, editing and adding new elements until it feels right to stop. Sometimes pieces become overworked. I often recycle them by cutting them up and using parts that ‘work’ to create new images. 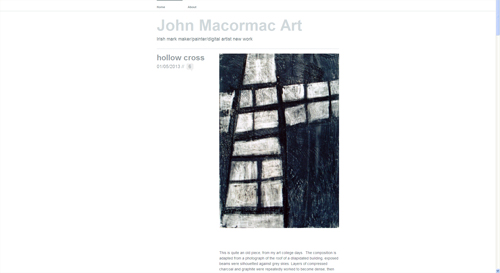 Click on the screenshot to see more of John’s work.

Edited to include Shoreline – a piece that particularly speaks to me.

Being an artist is like breathing.
It’s this incredible urge to create, that you can’t question.
Like breathing you just have to do it, or else you will die.
– Marina Abramović

How could you not love a blog with a quote like this displayed in prime screen-space? But even without it, I’d still love Leslie Avon Miller’s collages and creations – and the way she writes about her creative process. Her need for “solitude, contemplation and stillness” resonates here, as well as her profound appreciation of Life as rich and miraculous. 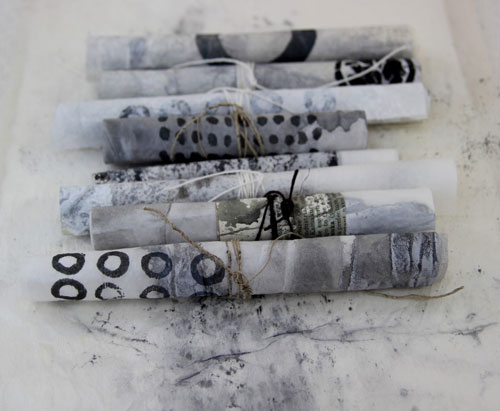 On her profile page we read:

Leslie Avon Miller experiences her work as a means to observe and honor the world around her. This requires solitude, contemplation and stillness as the work evolves.  Once the finished pieces are shared with others they become a conversation between the artist and the viewer. Each collage is as an entry into a journal, keeping in mind, as Heraclitus said; we can’t step into the same river twice. The compulsion for creating collage comes from experiencing life as beautifully wild, poignant, and fleeting. The process of creating collage clears space and light for experiencing the moments.

Pausing to deeply enjoy the stars and moon before bed and hearing the bird song in the early morning brings me enjoyment and satisfaction at the beginning and end of the day.  It is enough. Life is rich.  Life is a miracle. 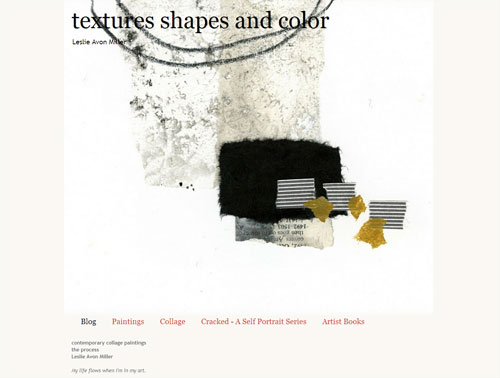 Click on the screenshot to visit Leslie’s superb blog.